The mission of Madonna University, a Catholic institution of higher learning, is to instill in its students Christian humanistic values, intellectual inquiry, a respect for diversity, and a commitment to serving others through a liberal arts education, integrated with career preparation and based on the truths and principles recognized within a Felician Franciscan tradition.

Madonna’s mission receives its spirit from these Franciscan Values:

In 1937, Madonna University (then known as Presentation of the Blessed Virgin Mary Junior College) was established by Mother Mary DeSales Tocka and her council in the Felician Central Convent in Livonia, with a first year enrollment of 18 Sisters.

Madonna University instituted master's-level programs in 1982 and became a university in 1991. A leader in nursing education at the state, regional, and national levels, Madonna’s College of Nursing and Health launched the University’s first doctoral program – the Doctor of Nursing Practice – in 2009. Through this growth and development, the institution has become one of the nation's largest Franciscan universities with a combined undergraduate and graduate student body of approximately 3,000 students. 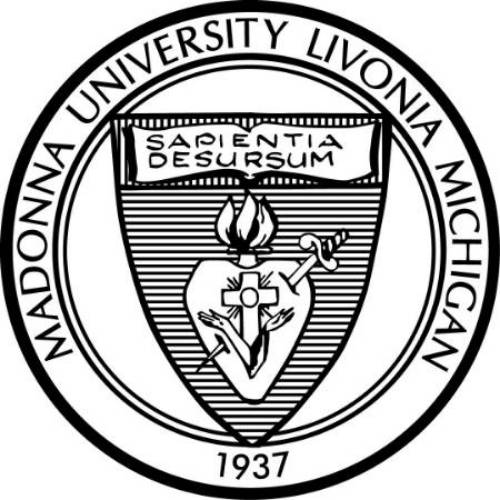 The Madonna University seal, used on official documents, consists of the shield placed within a circle bearing the name of Madonna University and the founding date, 1937. The shield, designed by Sister Mary Angeline Filipiak, CSSF, consists of two ordinaries (geometric design elements). On the chief (the bar at the top of the shield) of red lies an open book, the symbol of learning, signifying that liberal arts education is the aim of Madonna University. Across the pages of this book are inscribed the words Sapientia Desursum (Wisdom from Above), symbolizing the Holy Spirit, the source of all knowledge. The red of the escutcheon (shield) stands for the love of God, the aim and crown of all learning. The pierced Heart of Mary with a host symbolizes the adoration of the Eucharist through her Immaculate Heart. It is also the emblem of the Felician Sisters who conduct the University. Embedded in the heart is the Franciscan crest consisting of a cross held up by the pierced hand of Christ and the stigmatized hand of St. Francis of Assisi, who also is the patron saint of the Felician community.

The blue and gold are the University colors symbolic of its ideals: blue for loyalty to God through Mary, to country, and Alma Mater; gold for oneness of purpose and unified strength of the University community in perpetuating Catholic humanism.

The emblem of Madonna University portrays the philosophy and ideals that permeate the educational structure of the institution.

The foundation of Madonna University can be traced to 1855 in Warsaw, Poland where a young woman named Sophia Truszkowska, formed a religious order dedicated to caring for the poor, homeless, sick, and the elderly. Known as the Felician Sisters, this small group of women dedicated themselves to helping their community through the teachings of St. Francis of Assisi. The first Felician Sisters arrived in the United States in 1874, settling in a Polish community in Wisconsin to establish schools for the community’s children. By 1880, the Felician Sisters had expanded their efforts into Michigan, administering schools in both Bay City and Detroit. As the Felician community grew, so did the need for an institution of higher education to prepare Felician Sisters as teachers.

Madonna University exemplifies the fine tradition of Catholic and Franciscan scholarship that has contributed significantly to the intellectual and professional development in our society. With alumni on every continent except Antarctica, Madonna University graduates apply their knowledge and skills in meaningful service around the world – improving the lives of others, while excelling in their own professions.

Walking (alone or together)

For most of us, walking is as commonplace as breathing; and just as unthinking.  From the time we were tikes, once we mastered the skill, we began to explore our world as far as we could go, short of crossing the forbidden street (or maybe not).  Many of us walked to school or to church or to the local corner store or to a relative’s house. We walked alone or with others, singing a song in our heads, or poking and teasing our friends or siblings.  It was simply part of being alive.

Today, a little bit older, we walk for many reasons:  for exercise or to help us digest a full meal or to gain some composure and gather our thoughts.  One writer suggests. “Walking is simply a metaphor for a slower, more contemplative way of doing a thing we take for granted, that is, getting from A to B. On a larger scale, it is a metaphor for a way of life. Modern culture does not recognize, nor lend itself well to this metaphor.  I wonder, for instance, how the general population would respond if they discovered that a presidential candidate walked contemplatively, let’s say, two hours a day? Would it be deemed a waste of time, an indulgence not befitting the highest office of the land?”
Metaphor on Walking

The scriptures make frequent use of the image of walking especially with regard to following a path provided by God or Jesus or an angel or prophet. A frequent implication is that in walking such a path, we are never alone, but accompanied by the light and guidance of our divine companion.

In Jesus’ time, walking was the primary mode of “transportation.” Jesus traveled on foot from town to village gathering the curious and the needy along the way. The story of the Road to Emmaus is especially telling about the nature of walking together.

In this story, the risen Christ suddenly appears next to two disciples as they walk to their home carrying their grief after Jesus’ crucifixion. They do not recognize him; however he proceeds to interpret for them what the events of the last several days were all about. Upon arriving home, they invite this “stranger” in for a meal, whereupon they suddenly see who he really is.  Illuminated, they return to Jerusalem to announce to the disciples the meaning, the truth, of the last several days: we must not dwell on a crucified Jesus, but a Risen Christ.  Less a matter of sadness and despair, but of joy and hope!

St. Francis was an itinerant preacher.  He often walked alone through the hills and valleys near Assisi; but just as often he walked with one or more of his brothers, frequently with Brother Leo, his friend and confessor.  It was during these walks that Francis preached to passersby, often by word, but just as often by his example, extending an embrace or a laying on of hands, a gesture of compassion and healing.

“Francis was aware that they were a strange, perhaps frightening sight—twelve unkempt beggars walking purposefully along like a band of robbers. But he hoped their singing and their joy, the blessings they freely gave disarmed all fear and hostility.

“They would always greet whomever they met with, ‘The Lord give you peace,’ as Jesus had revealed to Francis that they should do. And they eagerly sought to help out in the fields or wherever they could help, not seeking money or alms in return, but hoping for food at the end of the day. And so it went, the daily trek back to Assisi, their hearts filled with the joy that Jesus had shown.” (from Francis and Jesus by Murray Bodo, OFM).

Pope Francis and the call to Synodality

In the fall of 2021, Pope Francis called all Catholics, indeed all people of good will, to come together, to walk together, in communion and dialogue through a process of Synodality. It refers to a particular style of engagement where mutuality and equality are hallmarks. It suggests that we recognize that the journey of life need never be done alone, but in the shelter of, and with the support of, each other.

The purpose of the Synod is not to produce documents, but to plant dreams, draw forth prophecies and visions, allow hope to flourish, inspire trust, bind up wounds, weave together relationships, awaken a dawn of hope, learn from one another and create a bright resourcefulness that will enlighten minds, warm hearts, give strength to our hands.

Elements of the Process of Walking Together:

The Communion we share finds its deepest roots in the love and unity of the Trinity. Together, we are inspired by listening to the word of God through the living Tradition of the Church and grounded in the sensus fidei (the sense/understanding of the faithful as a whole) that we share.  We all have a role to play in discerning and living out God's call to God’s people.

Participation is based on the fact that all the faithful are qualified and are called to serve one another through the gifts they have each received from the Holy Spirit in baptism. In a synodal church the whole community is called together to pray, listen, analyze, dialogue, discern and offer advice on making pastoral decisions which correspond as closely as possible to the will of God.

Our mission is to witness to the love of God in the midst of the whole human family. This Synodal Process has a deeply missionary dimension to it. It is intended to enable the Church to better witness to the Gospel, especially with those who live on the spiritual, social, economic, political, geographic and existential peripheries of our world.